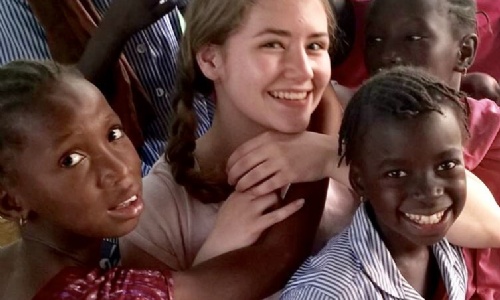 This week was started and completed with one of our pupil chosen charities for the year – Kaira Konko in The Gambia. In Monday’s Collective Worship we were fortunate enough to have a talk from both our local Bentley link, Trish Slator, and the charity starter, Marion Christmas MBE.

The Kaira Konko Scout Lodge is in Soma in The Gambia, West Africa and was built by Gambian Scouts with funds raised by Marion Christmas MBE and the 2nd Bentley Scout Group and was opened in 1998.

Kaira Konko Scout Active Support continue to support Kaira Konko, by overseeing the management of the centre in order to make the centre self supporting and sustainable for the future.  The children at Kaira Konko are already familiar with Bentley, as one of our former students was there recently with the Bentley Scout Troup.

It would be fair to say that they got the staff and children VERY excited about linking Bentley with a village school in The Gambia. We passed over second-hand Bentley uniform, a second-hand football net and some unwanted exercise books as the charity told us that these would all be very appreciated in West Africa by the teachers and children.

We have had a phenomenal day today celebrating our own part as International citizens. Children have dressed in many different colours to represent flags of the world and you have all been so incredibly generous to support the Kaira Konko schools with a tremendous 531 pencils donated and a wonderful £481.17. I was particularly touched to see how the pupils talked about bringing in their own pocket money and donated their own pencils. A huge thank you from the charity who have collected our donations to send over in the shipment next week.

International themed aspects on our School Development Plan over the last two years. Several staff aim to go over in holidays next year and (with permission from my family, staff and governors!) I am headed there as an ambassador for Bentley CE Primary this half term to learn how we can deepen our partnership work. This has been rather a whirlwind as I have bought my own ticket and signed up for lots of inoculations this weekend!

I join two other Church of England schools who are going over. Yesterday I was able to tell our pupils at school about my plans and I could immediately see the reality of this for them as suddenly The Gambia became a ‘real’ place in their minds. They talked immediately about how they could make a difference and also to link and be friends with these children living in a very different situation, which was extremely powerful.

I will report back more after the school holiday on my return, but if you would like to know more about the charity you could click here for the link to their website.