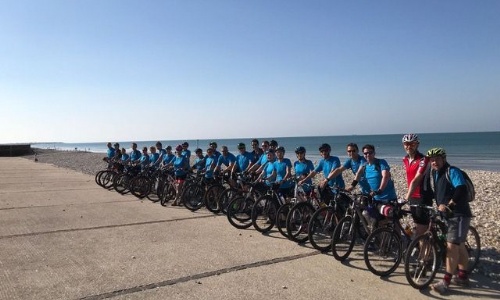 On Saturday 30th June, 28 brave cyclists embarked on a 50 mile, off-road bike ride back to Bentley to raise much needed funds to buy a new minibus.  Tessa Laughton not only cycled with the Beach to Bentley team, she also organised all the logistics for this event.  Here's her account of the day...

"It was only just after dawn on a Saturday in June when an unusual crowd began to gather in the playground of Bentley C of E Primary. No children ran and shrieked, held hands or kicked balls to each other. Instead, a bunch of sleepy parents, teachers and friends, all identically dressed in blue T-shirts with seagulls on their backs, greeted each other with murmurs and chatted apprehensively, before boarding two waiting minibuses. By 8 am when they arrived at Bracklesham Bay, a picturesque spot beside the sea in West Sussex, there wasn’t a cloud in the sky. The sun now hung overhead, waiting, warming. Perfect weather for a day on the beach. Less promising for a 50-mile uphill cycle ride across the South Downs.

After a hearty breakfast yards from the shore at Billy’s on the Beach – croissants, fruit, coffee, juice, more croissants – the group of 28 emerged energised. They donned helmets and gloves and, cheered on by a gaggle of wellwishers, climbed purposefully onto their bicycles and pedalled in the direction of the chalky, undulating hills to the north. The great Beach to Bentley Bike ride 2018 had begun.

The first section of the ride had been billed as straightforward, and it was. Passing through Chichester Marina, a large natural harbour on the Solent, the cyclists ogled the selection of yachts on display, before picking up the Salterns Way, then the Centurion Way. So far so flat. It wasn’t until they got to West Dean, after a stop for coffee, flapjacks and a burst of top-volume hits from the eighties, that the much-feared Big Hill made an appearance.

After a pause at the foot of the hill to tend to a puncture and relocate a few lambs who had strayed from the flock – a nail-biting moment for the ride’s organisers – the team was reunited and tackled the climb, under a now scorching sun. Training rides paid off and the team attacked the hill like champions, everyone reaching the top, glowing with triumph. The scenery alone made the effort worthwhile: sweeping views on either side took away what little breath they had left. What followed was a series of gentle ascents and swooping downhills along the South Downs way, through tall forests and across acres of rural wilderness, culminating in a steep rocky path down the road to South Harting, and lunch.

Refreshed, watered and treated to more of Mrs Ormond’s baked delights, the gang hit the trail again, ready to push through the rutted uphill paths of Durford Woods. Thick sand meant this section was fairly technical but the riders emerged unscathed, only to plunge into thick jungle at the top. A couple were almost lost to the overgrown bracken but managed to heave themselves out of the undergrowth and press on.

The day threw up challenge after challenge but these fearless cyclists were not deterred. Each ascent was met with shouts of encouragement, riders urging their companions to keep pedalling as the sun bore down and energy levels dipped. By the time they reached the final stretch at Alice Holt, having passed the rose-covered villages of Rogate and Liss and then sped through the Bordon woods, there was little petrol left in most tanks. The shiny shingle coating the final hill into the forest will doubtless live on in many memories as a particular torture, but our gang made it up and pressed on to the finish. The faces of the children waving and whooping at the barrier of Bentley railway station was enough to erase all pain from aching limbs as the team crossed the tracks and began the gentle ascent back to the school. As they crossed the finish line, pumping fists and shaking hands, the children cheered, bottles were opened and – hallelujah – pints were poured.

Enormous thanks are due to all those involved in ensuring that the 2018 Big Bentley Bike Ride was the best ever. John Ormond and Mike Kennet planned a superb route, led training rides and were frontmen on the day (one in the car, one out). Gill Ormond baked her way to every cyclist’s heart and together with Andy Phillips provided support at every turn. Cress Mizen and David Ibbotson got up at the crack of dawn to drive the minibuses to Bracklesham Bay and back. Sam Kirby gave up her Saturday morning to sign us all in at school. Laura Brace and her team provided the incredible artwork for the posters and t-shirts. Finally, at the finish, a team of volunteer parents; Craig Lucas, Jonny Boston, Nik Shaylor, Alex Perry, Cress Mizen, Maria Stofanak, Ellena Bentley-Woods, Steph Randall and Victoria Rae, led by Mrs Pinchess, braved the heat to BBQ burgers and serve drinks, while the children made and hung banners.

Click here to view the gallery of pictures from the day